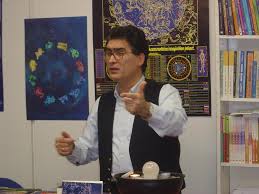 Thomas D. Gazis is an astrologer, writer and international speaker. He was born in Piraeus, Greece. After finishing college he moved to Italy in order to study Architecture at Turin’s University. He became a CIDA’s (Italian Federation’s) member and participated in many seminars and congresses in Italy while he attended international astrology conferences in Switzerland. In 1986 he completed his Diploma in Architecture and returned to Greece. He then became a regular contributor to Greek and international astrology magazines.

Thomas Gazis is the author of three Greek books entitled “Synastry, The Astrology of Human Relationships” and «The New 3rd Millennium’s Astrology” and “Byzantine Astrology” (under publishing). He has written articles for the Italian «Linguaggio Astrale» bulletin, for “American Astrology” (his article “The Living Zodiac” was published on the July 2003 issue) and for “Horoscope Guide” (his article “The Zodiac Banquet” was published on the April 2004 issue). He also wrote for “The Astrological Journal” (“The first English astrologers were Greek – Byzantines”, May 2009 issue) and for the “ISAR International Astrologer” (“The Astrological Chart of Alexander the Great”, v.36 2008)

He was invited – as a speaker – to the prestigious United Astrology Conference (U.A.C) held in May 2012 in New Orleans, USA (“Byzantine astrology: bridging a thousand years gap”). He has lectured at the “Breaking down the borders” online conference that was held between November 30 – Dec 2, 2012 (“The Amazing Similarities and Discrepancies Between the Babylonian and the Mayan Venus”).

Thomas Gazis organized “Astromykonos 2000”, an international astrology conference in the island of Mykonos, Greece, featuring among other international speakers Robert Hand. He also organized “Astromykonos 2001” featuring Noel Tyl and Elizabeth Teissier. He is considered as one of the prime movers for the formation of the South European Astrology Federation (F.A.E.S.).