Apparently we haven’t directly witnessed it, but our “cosmic” route has considerably shifted ever since humanity stepped over the threshold of 2018. Actually, we are now about to make (astrologically speaking) a long turn, that will ultimately lead us to the end of our decade. A decade characterized by a global economic crisis, that has so far proven to be particularly harsh towards the countries of the European south – and towards the “weaker” countries of the world in general. We all hope that in the following years the crisis will end and that we will start living a better life. But is this truly going to happen or things are going to get even worse? What kind of “zeitgeist” will globally prevail in the next few years? What kind of events will be produced on the economic, social and political level? Astrology is one of the few “fields of notion” that can provide answers to these critical questions.

The average Joe and Jane might not be aware of this, but humanity is about to collide with a powerful astrological phenomenon, a phenomenon that it has never encountered in its recent past! We are talking here about the notorious “Capricornian climax”! We call it “the Capricornian climax“ because very many and decisive phenomena will simultaneously occur in the sign of Capricorn, which is a “pivotal” sign in the so called “Mundane” or “Political” astrology” (in that branch of astrology that deals with large-scale events, with wider social trends, politics, world economy etc.). You see, the sign of Capricorn represents the all important in Mundane astrology “World Zenith” (you may read about it in my article: “When Hades reached the top of the Firmament” ).

The intensely transforming planet Pluto has been for the last 10 years in the sign of Capricorn. And within the next few days (on December 20, 2017 to be exact) the rigid planet Saturn will enter as well in Capricorn, where it will be over – activated (Capricorn is Saturn’s “home”). Additionally, by the end of 2019 Jupiter will move in Capricorn too! Not to mention that the crucial Saturn – Pluto conjunction will take place in that very sign in 2020! Pluto and Saturn – allegedly the two “bad guys” of astrology – will be perfectly conjoining each other in 2020, at the 22nd degree of the “granitic” sign of Capricorn! Finally, the eclipses are – for the most part – shifting now to Capricorn. This “capricornean climax” is quite rare and it might very well give rise to intense and pivotal events worldwide!

In a future article I will try to explain in details this potent climax and its probable implications for our planet, for the international scene, our societies, economy etc. But as the future is somehow portended by the past, I think it is important to historically review here this impressive phenomenon and consequently list the most characteristic events that the presence of Pluto in Capricorn (in synergy with Saturn and Jupiter) has ensued in the past. We will gain then precious insights on the “geist” of the current historical period and on how things might unfold in the near future, as our decade is coming to its end.

The table below is showing us the previous periods in history that the same phenomenon occurred: planets Pluto, Saturn and Jupiter all three being in Capricorn, at the same time!

As you can see, this phenomenon is extremely rare and it occurred three times only in our entire historical past (say from 2000 BCE till 2017). On average, these three planets (Pluto, Saturn and Jupiter) are simultaneously residing in the sign of Capricorn once every thousand years! You probably understand now why the current “capricornian climax” is quite unique! Further ahead we will be citing again this table, so keep in mind those critical years .

Since it is so rare for Pluto, Saturn and Jupiter to be simultaneously in Capricorn, let us simplify our quest here and look for the previous historical periods when Pluto alone was in that rather stern sign. Anyone who has experienced the catalytic events that were triggered from 2008 on – since Pluto entered Capricorn – is definitely aware of how instrumental Pluto has been in this “crystallizing” sign, representing the “World’s Zenith”!

Traveling back in time, the previous period with Pluto in Capricorn was the one between 1762 CE and 1778 CE (almost 248 years ago, a full Pluto’s orbital period around the Sun. Please note here that due to its once every five to six months “retrograde” motion, Pluto is ever moving back and forth, returning for a few months to the previous sign or prematurely moving to the next one – only to return to its “base” sign for a last time. So, the time-frame for the stay of Pluto in a sign – or of any other retrograde planet for that matter – is a little  bit blurry).

As we can see in the following table, some momentous events occurred between 1762 and 1778 CE! This was an era that radically changed the shape of our societies – mainly due to the industrial revolution and to the emerging on the world scene of the greatest power on Earth today, of the United States!

The old Prussia (let’s say a more “die hard” version of today’s Germany, with some dose of Poland) was flourishing back then, under the “enlightened despotism” of Frederick the Great. Frederick  proceeded to a radical monetary reformation and – like today  – he encouraged immigrants from various countries to come over and settle in his rather sparsely populated empire!

The patriarch of the reportedly richest family on the planet today, Mayer Amschel Rothschild, began to professionally and economically prosper in that very period. A period that meteorogically speaking was rather chilly.

Going further back to the past, we encounter again Pluto transiting in Capricorn (along with Saturn this time) almost half a millennium ago, within the period 1515 CE – 1532 CE. As you may see on the table below, that period caused profound changes in the fabric of human societies! In 1520 CE (with Saturn and Pluto in Capricorn and Neptune in Pisces – the very same configuration we are experiencing today) the Spaniard Hernando/Fernando Cortes attained major victories against the Aztecs, paving the way for the massive colonization of the “New World” by the Europeans!  In that very same year Magellan became the first European seafarer to cross his namesake passage, from the Atlantic to the Pacific Ocean.

The Renaissance was spreading back then like fire all over Western Europe. The Lutheran religious reform caused a deep split between northern and southern Europe, which we may detect even today. Almost all branches of the Florentine Bank of the Medici across Europe collapsed like a tower of cards and this led to a profound restructuring of the old continent’s financial institutions.

The year 1520 CE is marking as well the beginning of the golden age of the Ottoman Empire, with Suleiman “the Magnificent” being proclaimed the Sultan. The emerging Ottoman empire had just conquered then a whole chunk of the European continent!  On the other hand, this was one of the bleakest periods in the history of several nations of Europe, Asia and Africa, as those nations were subjugated by the ferocious Ottoman – asiatic army!

Let’s go now even further back to the past, in the period 1269 CE – 1287 CE. To many, this period might seem void of important events. And yet, if you recall the “critical” years you saw on the very first table of this article, that’s an exceptional period! You see, this is the last historical period that Pluto, Saturn and Jupiter – all three – were transiting at the same time in the sign of Capricorn! Meaning that there was a “Capricorn overload” back then, instigating a stern, acute and somehow disruptive “geist” all over the world. And indeed such a “geist” there was, as the nomadic and warlike Mongolian tribes had managed back then to conquer a humongous area of the Eurasian continent, flattening entire armies and radically changing the map and the culture of the time! 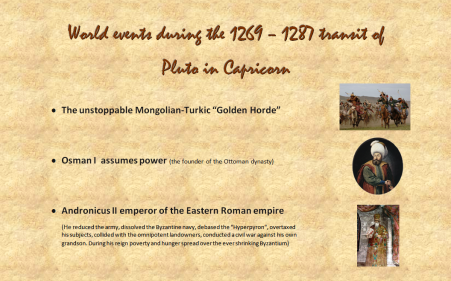 On the wake of this Mongolian – Turkic expansion, the Turks invaded the Asia Minor and began conquering vast Byzantine lands – essentially without meeting any resistance. Osman, the founding father of the Ottoman Empire, took power in this period! On the other hand, the Eastern Roman empire (Byzantium) was just entering then in its decline stage!

It was in that bleak period that Emperor Andronicus II ascended the throne of Byzantium. He faced an almost total dissolution of his state, extreme poverty and lack of indispensable goods. Thus, he was forced to reduce his army (in critical times) and to completely dismantle his navy (selling his ships as timber). He debased the so called “golden pound” of the time (the notorious Byzantine “Hyperpyron”) and ordered an over-taxation of his subjects. The big landowners ferociously collided with him. And tο add insult to the injury, Andronicus II and his grandson Andronicus III (both having their Suns in Aries) engaged in a deadly civil war!

If we travel now approx. 248 years further in the past we arrive at the period 1024 CE – 1041 CE. Stephen of Hungary defeated back then Conrad II of the Holy Roman Empire. A major famine induced by climatic changes occurred in Europe. Regarding the Eastern Roman empire, this is a period that coincides with the ending of the glorious reign of Basil the Great and the abrupt beginning of Byzantium’s fall. Some critical events that ultimately led to the religious, cultural and socio-political schism of East-West took place in that era. The Byzantino – Turkish skirmishes were ever more escalating.

If we descend now another “plutonian step” (248 years) back in time we arrive at the period 778 – 796 CE. The Vikings were wildly raiding England in that period. That was a debilitating period to Byzantium too, mainly for two reasons: the papal Rome recognized then for the first time a frankish king, Charlemagne, as the legitimate Roman Emperor (and not the Byzantine “basileus”, as was traditionally done)! Furthermore, a deadly civil war erupted then within the the confines of the Eastern Roman empire (prompted by the so called “Iconoclasm”) . Empress Irene the Athenian ascended to the throne, and among various political shenanigans she ordered the killing of her own son! Meanwhile, the ancestors of the Turks – who were living back then on the Mongolian Altai plateau – were about to make their first dynamic appearance on the world stage.

Finally, if we take another “plutonian step” down we arrive at the period 532 CE – 551 CE, which corresponds to the epic-tragic reign of the emperor Justinian! We encounter again the “planetary trio” of Pluto, Saturn and Jupiter residing in the sign of Capricorn! The “geist” of that era consists on the one hand of a majestic, epic element (the Byzantine Empire reaches its maximum expansion – stretching from Spain to Mesopotamia. The magnificent church of “Hagia Sophia” was built in Constantinople). And on the other hand of a tragic element! You see, that was an utterly apocalyptic era, due to the out-broke of the deadly Justinian plague, that left behind it a trail of millions and millions of dead people. And as if this wasn’t enough, the Byzantine citizens faced then the Justinian’s callous over-taxation too (if his tax-collectors came across a family that was decimated by the plague, the living neighboring families had to pay themselves the taxes the perished family was bound to pay)!

Climatically speaking, Justinian’s period is considered one of the coldest in human history (the sign of Capricorn is astrologically connected to the “big chills”). There is even a theory of a mega-volcano exploding back then, blanketing with its spewing ash the entire planet!

All in all, the “Capricornian climaxes” are profoundly affecting our societies, marking major transition periods for humanity! They might produce a universal “geist”of austerity and deprivation, of heavy taxation, of wars (even civil ones) and generally bring forth extreme or even life threatening conditions. Also, during the “Capricornian climaxes” the oriental part of the world is generally blooming while the western part is declining (with the “east” somehow conquering the “west”)…