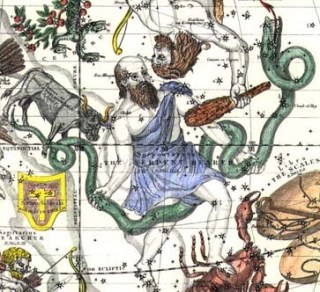 The issue of Ophiucus – the so called 13th zodiacal sign – has surfaced again in the media. In reality Ophiuchus is a CONSTELLATION, not a zodiacal sign. There is a huge difference between the two! And ultimately this is the whole gist of the matter…

A brief but lucid explanation of the difference between a constellation and a “sign” is given by the American astronomer – and professor at the University of Illinois – James B. Kaler, who in his book “Astronomy” (Harper Collins College Publishers) writes:

So, Ophiuchus IS NOT a zodiacal sign but a zodiacal constellation! The two ARE NOT the same. The confusion stems out of the fact that the twelve zodiacal SIGNS bear the same names as the twelve CONSTELLATIONS. But that’s where their similarities end. They have nothing else in common.

A CONSTELLATION is something visible and tangible while a zodiacal SIGN is not. The signs are absolutely invisible! We have to think of them as 12 equal divisions of the space around Earth. We do not know much about them and they actually constitute a mystery to us. To get a hint on their nature we have to resort to one of the greatest astrologers – philosophers of all times, Dane Rudhyar! He is writing on the zodiac (which is actually composed of the 12 signs):

So, it is relatively easy to debunk Ophichus as the 13th zodiacal sign. The zodiacal signs have always been and will always remain 12! But under all this Ophiuchus issue lies a deeper question: WHAT A ZODIACAL SIGN REALLY IS? We still don’t know! Zodiacal signs constitute one of humanities greatest mysteries! They really exist, we have ascertained them, even measured every single property of theirs! We have never seen them or touched them, though. They simply transcend our senses and current perceptions.