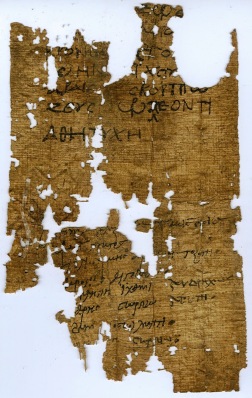 It doesn’t seem like much but the image you see above depicts a  miraculously preserved ancient horoscope! It is a horoscope in its textual form that was habitual in that period and it derives from the Hellenistic Egypt, which is the cradle of modern, “horoscopic” Astrology! There, the ancient Greeks (in collaboration with Egyptian, Jewish etc. priests and scholars) created two thousand years ago an incredibly sophisticated Astrology, which is the precursor to the one we are practicing today.

This horoscope was found in the ruins of the Hellenistic city of Oxyrhynchus (160 km south of modern Cairo), which is located on the banks of a Nile’s tributary. In that region they had in abundance a holly Egyptian fish, which was called in Greek “oxyrhynchus” (sturgeon). Hence,  the Greek name of the city (Oxyrhynchus, the third largest in Hellenistic Egypt).

It is a horoscope written on a piece of papyrus that remained relatively intact for 18 whole centuries because it was buried in the Egyptian desert sand – under ideal that is for its preservation conditions. In fact this papyrus was found – along with thousands of others and dozens of horoscopes – in the ancient rubbish dump of the city of Oxyrhynchus!

As you can see, the above papyrus looks like eaten by bugs and it has major voids in it. The experts however managed (by the method of “solving the crossword”) to restore a large portion of the text. Let’s see below its full “transcription”:

This is the horoscope of a person that was born (as you can see in the second paragraph of figure 2) in the third year of the reign of the Roman Emperor Severus Alexander (this was the way they were identifying a particular year back then, on the base of the emperor ruling at the time). The individual was born in the sixteenth day of the Egyptian month “Choiak”, in the fifth hour of the night (five “nocturnal” hours after sunset that is). This puzzling date actually corresponds to the date December 14, 223 CE, at 9 pm. You can see the modern version of this ancient horoscope (as created by the “Solar Fire Gold” software)  below : 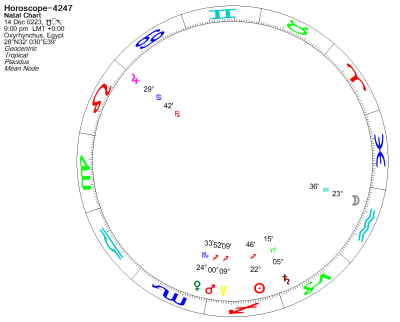 I am inviting you to check carefully the photo of the papyrus horoscope at the top of this article! You might notice there three different handwritings (meaning that three different people wrote something on this papyrus)! At the very top of the papyrus there is the first handwriting (with the large capital Greek letters). It is providing us the original info for this horoscope, written as I mentioned before in a textual form, according to the habit of that era. You will not find in it any astrological glyphs – except the glyph for the Ascendant (ωροσκόπος), which is composed of the Greek letter ρ (rho) piercing the ω (omega).

At the bottom left though of the papyrus there is a different handwriting. A rather feisty character, writing with “lowercase” letters and at an upward angle. Actually, this person is correcting the spelling of certain words in the original text (he is correcting i.e. the Greek word for the sign of Capricorn – which is originally written as “Εγοκερω” – into its right form “Αιγοκερω”. He seems to be some sort of scribe, more than an astrologer.

The striking misspelling of the sign of Capricorn alludes to the fact that the astrologer who wrote the original text in this papyrus was either very poorly educated or a Greek speaking foreigner – usually an Egyptian or Hebrew.

This more competent astrologer has identified two erroneous planetary positions, which he is marking with a symbol that looks like a Greek lambda (λ): the Moon which is not in the sign of Pisces but in Aquarius and Mars which is not in Scorpio but in Sagittarius! And the fact is that the impeccable modern astrological program “Solarfire Gold” fully concords with him! It puzzles us though the fact that although this second astrologer seems to be far more competent than the first one, he fails to determine the proper position  of Venus (it is in Scorpio, not in Sagittarius). Maybe the ephemeris or the almanac that the second astrologer used to calculate the position of Venus was somehow flawed, in Venus’ case…

We can say that the man for whom this horoscope was cast was not very happy with the first astrologer. Thus he eventually requested a second opinion from an apparently more competent astrologer. And today we are in the position to know that his choice was absolutely right!