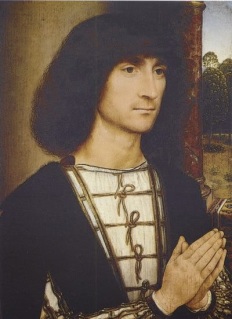 To my knowledge, there has never been a thorough study revealing the extent to whichthe incidental likings or aversions of the people involved in any situation ultimately determine the course of that situation – and the course of the events in general, both in our every day lives and in historical occurrences. I suspect that such a factor is considerably larger than we generally believe. Often it is due to some particular sympathy flaring among the participants of an x situation that turn i.e. a job interview into a cosy chat, that bring forth unexpectedly profitable deals, collaborations and enterprises! Thus,the quality of the human interactions, the inner “attunement” of the individuals (their “Synastry”, as we call it) is of an uttermost importance and it lies at the foundations of many human accomplishments!

I was pondering on this while I was studying the Synastry of the “Renaissance man par excellence” Leonardo Da Vinci and his major patron: the Duke of Milan Ludovico Sforza! I was wondering what was the astrological element that prompted Sforza to offer his generous and multi-annual patronage to Da Vinci (who had been seeking such a patronage out of many Italian lords all over Italy but mostly he was denied it)! 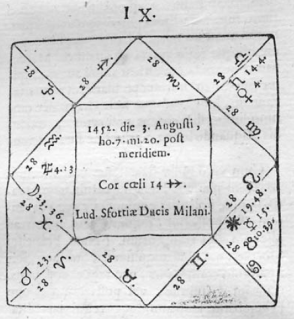 As you may see above, the horoscope of Ludovico Sforza has been preserved (this square type of horoscopes was in vogue till a couple of centuries ago). Sforza was born on the 3rd of August 1452 (Julian calendar). Thus, the Duke was a Leo Sun with his Moon in Pisces (by the way, he has the same “Luminaries” combination as  actor Robert De Niro – and judging by the Duke’s portrait they look alike!). His Ascendant is in Aquarius. You may see below the modern counterpart of his Renaissance chart: 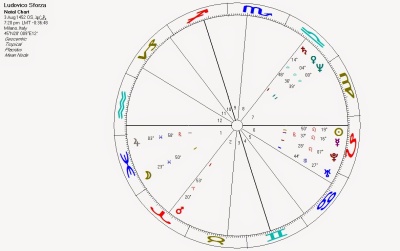 We know as well Leonardo’s Da Vinci natal chart (his grand-father had noted the exact date and time of his birth and fortunately that specific note has been preserved). Da Vinci was a Taurus Sun and he had his Moon in the sign of Pisces (isn’t this an artist’s combination or what?). His Ascendant was in Sagittarius. You may see Leonardo’s chart below: 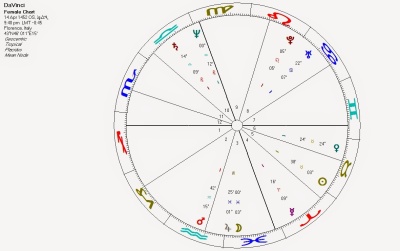 Da Vinci was born in a village near Florence and he lived in this illustrious city till his thirties (he was apprenticed to Verrocchio and received some form of patronage out of the tycoon Medici family). Things though were turning against the Medici’s and him personally (he was accused of sodomy) and thus in 1482 he moved to Milan, where he was very well  received by the Duke of the city Ludovico Sforza. The Duke was a Leo and Da Vinci a Taurus. Their solar signs are considered discordant (actually, they are discordant!). How comes then they matched so well (Da Vinci stayed at the Sforza’s court for 17 whole years)? Well, Synastry is much deeper than we think and it somehow moves in mysterious ways!

The Duke of Milan was a Leo. But Da Vinci was in a certain sense a Leo too! You see, he had his Sun in his Fifth House – and that is a potent domification, since the Sun is the ruler of the Fifth House! So definitely there was a common thread connecting them (Leonardo was orchestrating i.e. for the Duke  spectacular wedding ceremonies and other extravagant social events and happenings – putting on stage i.e mechanical “knights” moving on their own etc.)! Not to mention the fact that in their Synastry Leonardo’s Sun is “falling” in Sforza’s Second House (as you can see below). Thus,Leonardo was somehow “Taureanizing” the Duke of Milan – meaning that through their interaction Leonardo was activating in the Duke certain Taurean properties, turning largely Sforza (especially when Leonardo was dealing with him face to face) into the very sign he was! 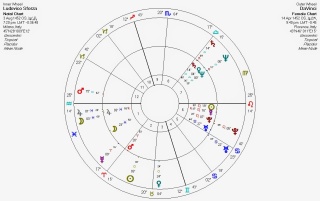 Furthermore, an extremely unifying factor is stemming out of their Moons! They both had their Moon in the sign of Pisces (meaning that their “inner worlds” were largely composed of the same stuff and that they could instinctively connect and “feel” each other!).

And now the two “uber” beneficent / patronage kind of factors in this Synastry! First, the Duke’s Jupiter is standing exactly over Leonardo’s Moon (the Duke’s Jupiter is in the 3rd degree of Pisces and is synastrically forming a PARTILE conjunction to Leonardo’s Moon, in the 3rd degree of Pisces!) And second, the Duke’s Sun is “falling” in Leonardo’s Ninth House (this is an archetypal benefactor’s / “godfather’s” domification)! There are some other minor beneficent configurations too but we might as well rest our case here…