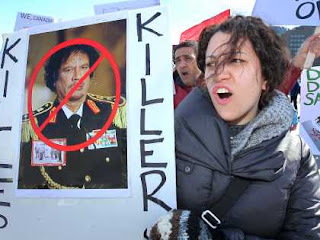 (photo from Canada com)
We have been witnessing recently some unique historical events! In a domino effect, one after the other the people of Northern Africa and Middle East are massively revolting against the oppressive regimes that were ruling their countries for entire decades, reaching to the point of even dethroning their ex omnipotent dictators!

These are unique political events, of unprecendented proportions! What is the momentous astrological event that triggered them? Well, actually it is a whole series of astrological events, a true chain reaction! First of all planet Pluto in Capricorn. As I had written back in 2008 in my relative article Pluto in Capricorn the various oppressive regimes would become now even more so, chalenging the tolerance of their people. I quote verbatim: “The creative side of Pluto is that he destroys whatever is old, worn, “sick”, with no strength in it and regenerates it under a new, vibrant, healthy form! At the same time, Pluto is the planet of the “masses”, of the ordinary people when they act en masse! Thus, a basic scenario is that we are now entering a phase where politics, the governments will change their structure in depth, they will completely regenerate! At the same time, the everyday people, the masses, will start exerting a more direct and dynamic influence on the governments – especially if they are not democratic!”

Apart Pluto in Capricorn, an enormous revolutionary potential is unleashed by Jupiter in Aries conjunct Uranus in the last degrees of Pisces – Uranus entering soon in Aries, too. As I had written in my June 2010 blog post Jupiter – Uranus in Aries  the planets Jupiter and Uranus hovering over the Vernal point would trigger the dynamic manifestation of a new brave and awaken individual, a “rebel with a cause”! Additionally, a very decisive factor is the square aspect formed between Jupiter – Uranus on the Vernal point and Pluto in Capricorn. This particular configuration has precisely occured only once more in the last 2000 years, in 1762 – a few years before the two unique in history French and American revolutions!  Not to mention the fact that the uprisings took place mainly during the Sun’s transit in the revolutionary sign of Aquarius!

So, these events constitute the exterior manifestation of some deeper processes occuring now in the collective. They are somehow the product of a gigantic clash between the “sharp Aries need for self-expression, individuation and liberty” and the dark Pluto in Capricorn “phobic need for totalitarian control”. Thus, the astrological analysis is giving us a deeper understanding of all these uprisings, which might prove to be just the beginning of a bigger proccess and possibly breed in the near future some major revolution, like the ones of 1776 and 1789!