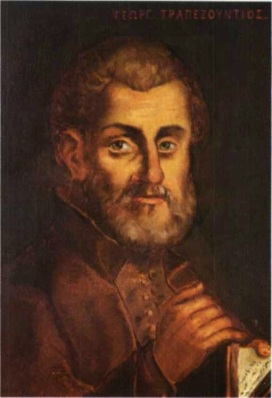 Many historians nowadays are beginning to realize that the contribution of the Byzantine scholars to the Italian Renaissance – although much praised  – in reality has been underestimated! I could share my own testimony here – for the little it counts for – since I am researching Byzantine astrology for many years and I have come to the conclusion that the Byzantines Astrologers have substantially influenced their European colleagues – and the Renaissance Astrology in general!

A leading figure of the Byzantine and Renaissance Astrology – a figure that directly and indirectly influenced many European astrologers – is George of Trebizond (or George Trapezuntios)! He was born in 1396 in the island of Crete. His family originated from Trebizond in Pontus (now Trabzon in Turkey but back then a major Greek-Byzantine city and an important astronomical and astrological center). Trapezuntius was a true cultured Astrologer (we might call him today an “omniscient” as he was an astronomer, a mathematician, a translator, orator, philosopher, physician etc.).

People know next to nothing about Byzantium and the Byzantines. So, to make you realize – in the blink of an eye  – how important Trapezuntius has been to the European astrology I am inviting you to take a look at the photo below. It shows a list of the books that the famous English astrologer William Lilly had in his possession (he enlists them himself at the end of his book “Christian Astrology”). In this list we can clearly see that Lilly was studying the Georgius Trapezuntius’ book “In centum Ptolomei Aphorismos”! 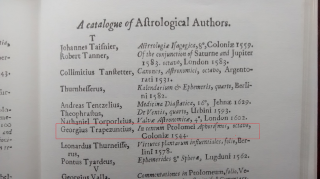 In those times Crete was under Venetian rule. Thus, in 1496 Trapezuntius – having already distinguished himself in literature, philosophy and science – moved to Venice in order to work as a secretary at the powerful politician and humanist Francesco Barbaro. Alongside his work he began teaching Greek (which was becoming “fashionable” back then in Italy) and probably astrology too! His fame spread rapidly throughout Italy and he was soon receiving invitations to teach at various universities (he taught at the ones of Vincenza, Florence and Rome). A few years after, an even greater recognition came for him by the hand of the very Pope Gregory IV (a great lover of literature and the arts) who appointed him an apostolic secretary!

In all those years Trapezuntius (apart from teaching letters, phisosophy, oratory and eventually translating greek texts into latin) was most probably practicing and teaching astrology too! We have a testimony on this from the famous Italian astrologer Lucas Gauricus. In his popular book “Tractatus astrologicus” Gauricus collected/ computed the horoscopes of the most illustrious scholars of his era and among them he displays the one of Trapezuntius! You may see it below in its square form that was very popular up to a couple of centuries ago. Gauricus is “tagging” Trapezuntius as an astronomer (a term that in the language of that era means mostly an astrologer!) 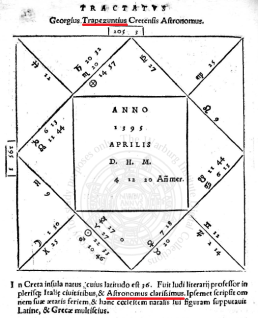 Below this horoscope Gauricus is adding some info on Trapezuntius (in Latin): “He was born in the island of Crete, whose latitude is 36 degrees. He has been a professor of letters in many Italian cities and a distinguished astronomer. He himself recorded all his relative birthday events (Gauricus means here the specific date and time of every Trapezuntius’ Solar Return) and he computed this particular natal chart, in various Greek and Latin forms”!

The above horoscope looks neat and well calculated but in reality it is somehow inconsistent! First of all, it indicates as Trapezuntius birth year the one of 1395. In his biographies though Trapezuntius is reported as been born in 1396. To make things more complicated, the planetary positions in this horoscope do not correspond to the very year indicated on it (1395) but to the year 1396! Furthemore, the indicated time of birth is 12:20 “An. Mer.” (meaning “Ante meridiem”), resulting to 00:20 AM. Thus Trapezuntius’ full data of birth should be April 4, 1396, 00:20 in Iraklion – Crete. By providing these data to the overall infallible astrology program “Solar Fire Gold” we get the chart you see below (I am using the Porphyry house system that was the most popular in that period – Gauricus is using another house system that is none of the ones we are familiar with. I think it is the obsolete by now “Bianchinus”).

What strikes us immediately is the fact that the Moon is in Aquarius and not in Pisces. Actually it is in the 16th degree of Aquarius, almost half a sign away from the position indicated by Gauricus (1 degree of Pisces). In fact, on that specific date the Moon would enter the sign of Pisces at 22:18 – almost 22 hours after the time indicated on Gauricus chart! For the rest, the other planetary positions are almost coinciding!

There is though another major Italian Renaissance astrologer who somehow paid tribute to Trapezuntius by publishing his horoscope as well: Hieronymus Cardanus!  In his book “Liber de exemplis centum geniturarum” (“A Book of a hundred nativities’ examples”, in which Caedanus is analyzing many horoscopes that were already present in Gauricus “Tractatus Astrologicus” – plagiarizing thus Gauricus, a common practice back then – he includes as well the horoscope of our brilliant Byzantine scholar. Cardanus was a “Ptolemaic” astrologer and that was an additional reason for him to honor the “par excellence: Ptolemaic Trapezuntius – whose books most probably had thoroughly read! Actually, he is presenting the horoscope of Trapezuntius on the very first pages of his book – second only to the horoscope of Petrarch!

Cardanus is using the Equal House planetary system and certain planetary positions in his chart are identical to the Gauricus ones – to the minute! (Venus’, Saturn’s and the North Node’s)! But we find again here a wrong natal Moon for Trapezuntius: 2 degrees and 20 minutes of Pisces – instead of the 16 degrees and 52 minutes of Aquarius). So, either the birth data of Trapezuntius is wrong and he indeed has a Pisces Moon or his data is right and his Moon is in Aquarius (it was miscalulated by both Gauricus and Cardanus – or simply Cardanus blatantly copied Gauricus, changing slightly the positions of some planets so that they do not all match the ones provided by Gauricus…).

In any case, we are rather perplexed by the apparent miscalculation of the Moon from the part of both Gauricus and Cardanus. Especially Cardanus – apart from being an excellent astrologer / astronomer – is considered one of the greatest mathematical minds in the history of mankind! And even if this Trapezuntius’ horoscope was casually found by Gauricus and Cardanus in some manuscript and was merely copied to their books, they should have accurately verified every single planetary position on it before publishing it.

We should add a precious piece of information here: John Monfasani – a major Trapezuntius’  modern biographer –  is arguing that this great personality was born on April 3, 1395 (if this is the case then his Moon is in Virgo – and that Moon reflects very well the fact that he was very productive, that he worked for a long time as a secretary and that he was attracted by young girls). Apparently though Monfasani is not a great astrology connoisseur, because he draws the conclusion that Trapezuntius was born on the 3rd of April out of a personal note the latter wrote, stating that on the 3rd of April 1453 he was having his 58th Solar Revolution. Every astrologer knows though that a solar revolution may occur a day before our calendric birthday – so Trapezuntius might very well have had his 58th Solar Return on the 3rd of April 1453 while actually his birthday was on the 4th of April.

Of course, if Trapezuntius in 1453 was celebrating  his 58th (and not his 57th) Solar Return  then he must have been born in 1395 and not in 1396! There is though an elemenet capable of causing a certain confusion: a byzantine year was starting on the 1st of September! The byzantines that is were celebrating the first day of their new year 4 whole months before the Italians! This sort of discrepancy might have brought a certain difficulty in the conversion of the byzantine years into the corresponding Italian ones.

In 1447 the patron of Trapezuntius Pope Eugene died and Nicholas V took his place. Nicholas maintained Trapezuntius as an apostolic secretary – and as a translator of Greek secular and religious texts! At about this time Trebizond translated into Latin the “Almagest” of Ptolemy adding to it a commentary of his own in Latin – a commentary that would become very popular throughout Europe for the next four centuries!

(A commentary of Trapezuntius on Ptolemy’s “Almagest”)

In the new papal entourage though another scholar figure was becoming the center of attention: Poggio Bracciolini. Perhaps in order to differentiate himself from Trapezuntius – or to advance a “fellow patriot” of his in front of the unstoppable stream of Greek culture that was ever more sweeping Italy – Bracciolini imposed the rather minor (as we know today) Latin orator Quintilianus as the supreme intellectual figure of the day! Trapezuntius – who obviously felt unfairly sidelined by this meteoric rise of Bracciolini – began to feverishly shatter Quintilianus in his speeches and letters. Thus he inevitably came into conflict with Bracciolini himself – and obviously with the circle of Bracciolini’s “supporters”. That was a big mistake, because no matter how just Trapezuntius was (and how unfair Bracciolini) ultimately Trapezuntius was all alone in this fight – while Bracciolini as a typical Aquarius (and as an Italian of course) had numerous and powerful allies.

The pretence for dismissing Trapezuntius was given to the Bracciolini’s entourage at a meeting of the apostolic secretaries. There, Bracciolini made ​​an ironic comment to Trapezuntius who got up and  threw a powerful punch in his face (we shouldn’t forget that Trapezuntius was as Aries – and if he was born in 1396 he had his Mars in Aries too!). By committing this explicitly violent act against the vain reviver of Quintilianus he fell completely out of favour and eventually was forced to leave Rome in 1452 and move with his family to the – ruled by the Spaniards’ back then – city of Naples.

In Naples George of Trebizond worked as a secretary to the King Alfonso of Aragon. This was one of the his most flourishing periods, as he wrote then his two major astrological essays: the “A Short essay on Antiscia” (“Brevis de antisciis tractatus”) and “Why the judgements (predictions) of the astrologers are failing in our times” (“Cur his temporibus astrologorum judicia fallant “). At the same time, he translated into Latin the astrological work of pseudo-Ptolemy “Centiloquium”, which became as well a mega hit throughout Europe. Furthermore, he continued teaching and one of his disciples – in this dominated by Vesuvius city – was Giovanni Pontano, who would later on become a major humanist and astrologer! And while his Naples sojourn started pretty well, after a few years Trapezuntius began experiencing problems there too…

At a certain point Pope Nicholas V summoned Trapezuntius back to Rome. There he met (and probably even taught) Regiomontanus, who around the year 1462 was living  at the Roman villa of the Byzantine cardinal Bessarion – who had turned his house into a cradle of hellenism and humanism). But the environment in Rome was still “toxic” to this Greek emigre and he consequently fell victim to new adversities and intrigues. He left Rome and travelled to his fatherland Constantinople – which had fallen by then to the Ottoman Turks. Apparently the Turks were not very much thrilled by the Trapezuntius’ literary and astrological virtues, so he returned to Rome. But he was again treated in a hostile manner (as he had sought to establish relations with the arch enemies of Christendom the Turks). He finally died around 1473, destitute and suffering from dementia (he was wandering like a fool through the streets of Rome), without ever been acknowledged for the pivotal role he played in the revival of the ancient Greek-knowledge (and of astrology in particular) in the renascent Europe…